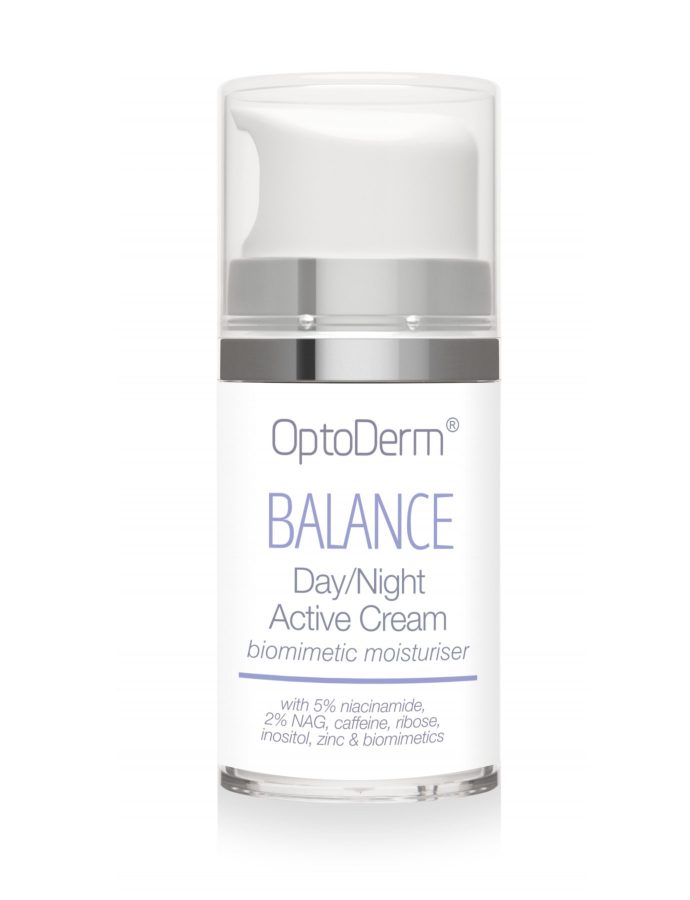 OptoDerm Balance forms a lipid bilayer on the skin. This phospholipid bilayer interacts with the lipid bilayers within the stratum corneum to reinforce the skin’s natural barrier, protecting it from harmful substances and bacteria and preventing transepidermal water loss (TEWL) . Phospholipids contain relatively high amounts of linoleic acid, which plays an important role in the skins own synthesis of Ceramide 1, a lipid that is important for intact barrier function.

The niacinamide in Balance has an occlusive effect, without being greasy. A published study found that niacinamide was more effective than petrolatum (a common occlusive ingredient in moisturisers) in reducing water loss from the skin and in increasing its moisture levels. Niacinamide is also non-comedogenic (pore clogging), is a potent anti-aging ingredient in its own right and helps to prevent excess sebum production, in acne-prone skins.

N-acetyl-glucosamine (NAG) & Niacinamide, together, confer multiple skin benefits, including pigmentation reduction, decrease in sallowness and increased skin elasticity and tone. They also synergistically promote natural desquamation of the skin, without the need for exfoliation. They are both effective actives in treating acne-prone skins.

Apply morning and night to face after cleansing and application of serums.

It may take your skin a few days to adjust to a new face cream. This is normal. It takes 5-11 days for the full effect of Balance’s lipid bilayer to become apparent on a dry skin. Use sparingly – a little goes a long way.

FOR EXTERNAL USE ONLY.

KEEP OUT OF REACH OF CHILDREN.

STORE IN A COOL PLACE AWAY FROM DIRECT SUNLIGHT.

In the interests of producing the most effective products and keeping up with new generation actives, formulations and ingredients are subject to change without notice. The ingredients indicated on the product label are accurate as to the content of the product batch referred to.

Only logged in customers who have purchased this product may leave a review.